THIS IS A SPOILER REVIEW

I have a question to the floor: Does anybody remember what happened at the end of Resident Evil 3?

No? Too bad... But perhaps it's not such a big issue, since I'm not really sure what happens at the beginning of Resident Evil 4 either. 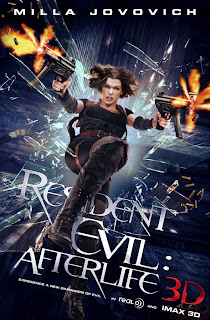 So you'll recall that the general plot of the previous films was something along the lines of: Insane powerful company called The Umbrella Corporation creates a powerful virus that turns people into flesh eating zombies. The virus gets out. Mayhem and chaos ensues. A small band of survivors make it through each film, with M.A.W. Milla Jovovich leading the bunch as Alice, who was also the victim of some very nasty Umbrella experiments... There, now you're caught up. Oh, and by the way the fourth entry also sees the return of original director Paul W.S. Anderson (who's Milla's husband in real life, at least at the time of writing), a man who has some serious duds on his CV.

The story begins when Alice attacks an underground Umbrella facility in a noisy, but unimpressive manner, and kills a whole lot of guards. Suddenly she's shot. She falls to the ground. Dead. But wait, what's this? Another Alice appears. Soon several dozen Alices take over the place, but the bad guy escapes and blows up everything behind him.

No, I don't know what that means either. 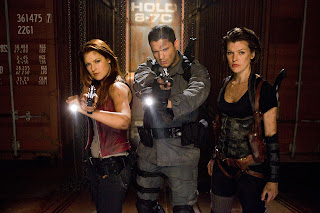 Enter the (presumably) real Alice, who's flying around in a plane looking for survivors, alas the world is all but empty, since the virus killed everybody. Then she picks up a radio signal from Arcadia, apparently this is a safe haven, free of infection and with plenty of food. When she arrives at the correct coordinates, however, all she finds is an empty beach and an abandoned helicopter. Then she's attacked by a deranged woman, who's got a spider-looking metal thing attached to her chest.

No, I also don't know what that means.

The woman turns out to be Claire (Ali Larter, hotness!). You'll remember her from the previous films, and if you don't we'll show you some clips to remind you. The two of them take off in Alice's plane.

They soon find a small bunch of survivors holding up in an abandoned prison. The place is surrounded by a crowd of starving zombies, numbering several thousand. They also find out that Arcadia is not a place... It's a ship, and right now it's located off the coast, very close to the prison. They figure they have to get out there, and thus attempt to hatch a plan to accomplish this, ignoring the fact that nobody on the ship seems to react to their emergency flares, or that the last transmission from the ship ended in a scream.

Then they stand around and do nothing for about an hour. They talk a bit. Nothing happens. No one attacks them.

Then the zombies suddenly manage to break into the prison and kill some people, which puts a bit of pressure on those escape plans. Since we're at the fourth film we need to spice things up a bit, so now the zombies have a huge tentacle mouth, with which they can bite off an entire head! (Again, this might also have been the case in the third film, but I have no recollection of it. It was definitely the case in Blade II, I remember that for sure.) The survivors must also go against a gigantic hooded guy with a big ax! (Him I remember as well... from Silent Hill.)

Finally the last survivors manage to make their way to Arcadia. The ship is empty, but they go into the basement and find huge white hangars filled with people in hypersleep and some choppers. Alice makes her way to the final room, where she meets the bad guy again - this was based on a computergame, I did mention that, right? He has glowing red eyes and two CGI zombie dogs, which split open and turn into a giant mouth. The bad guy has some issues, because he's turning into a creature, but he believes he'll get better if he eats Alice, because she's cool.

They fight - actually they mostly jump around in slow-motion - and Alice wins. All the frozen people are released, and everyone's happy. But then, what's this? Oh, it's the setup for a sequel... A gazillion Umbrella planes arrive to kill everybody. Cut to black. Roll credits.


FINAL THOUGHTS
I don't know why it surprised me that this film is SO much worse than the mediocre third entry. Maybe it's because it seemed as if the film makers were actually trying to get the series back on track, but the question remains: How do you create a horror film, without a single horific moment? Actually, there's not even a mildly interesting moment in the film. The brain-numbingly simple story - evil company releases virus, our heroes must survive - has actually gotten away from the filmmakers, who would have thought that was possibly? 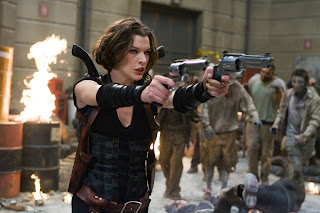 So for the creators of the inevitable sequel, here's my two cents:

Look to the first film, because that worked. Keep the story simple and create some characters we care about losing. Show some zombies getting slaughtered, and make sure Milla runs around in as little clothes as possible. Finally come up with one, just one, original idea we haven't seen before. You can do that, can't you?

Can't you?
by David Bjerre