Following in the footsteps of The Hunt of Red October, Patriot Games, Clear and Present Danger, and The Sum of All Fears, Jack Ryan: Shadow Recruit, the fifth cinematic adaptation of the popular Tom Clancy character, goes back to the start of Ryan's career, to establish how he became the formidable agent we know and sometimes love. Starring Chris Pine as Jack Ryan, Kevin Costner as his mentor, and Keira Knightly as his future wife. Directed by Kenneth Branagh, who also appear in the part of Ryan's main adversary, the Russian Viktor Badguyovich. 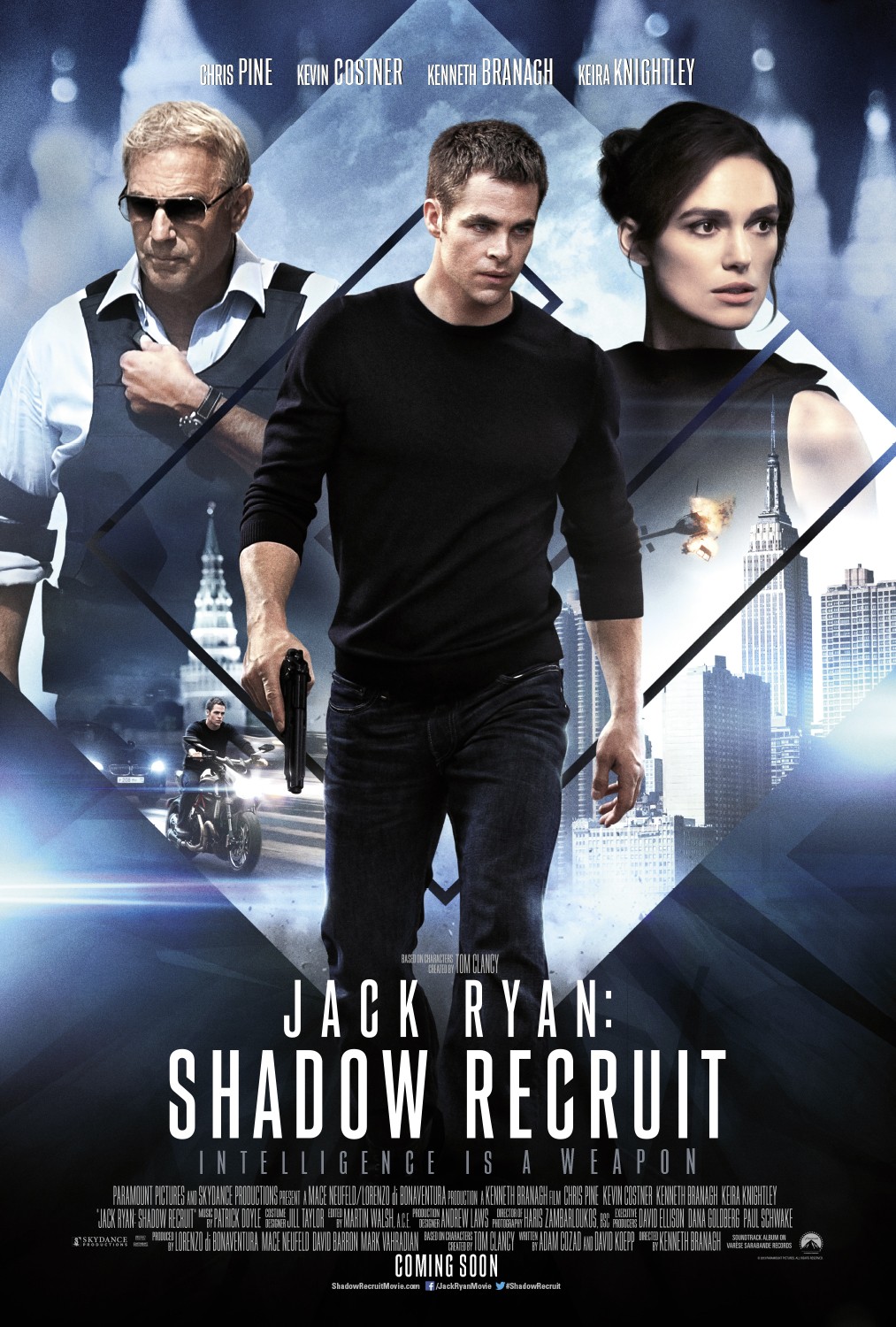 You know you're in trouble when the opening scene of a film evokes the 9/11 horrors to induce some sort of emotional response from the viewer, which it hasn't yet earned, while surreptitiously suggesting that whatever follows is justified, you know, because of the whole terrorism thing and stuff.

For those keeping track at home, Jack Ryan: Shadow Recruit is the fourth incarnation of the character on the silver screen, luckily every new actor hasn't been forced to go through the obligatory origin story, which raises the question: What secrets lie buried in the deep background of a guy who once jumped from a helicopter to a submarine, to prove he was right? Shockingly little. The dude saved some fellow soldiers once, then he got hurt, but he was really good at getting rehabilitated, and then he was recruited by the CIA, because he had a single good idea. Even Steven Seagal would have asked for a more substantial background.

Having established Ryan's impeccable nature in both body and mind, with the subtlety of a piglet getting its nuts cut off, we're ready to embark on Shadow Recruit's riveting plot. What rip-roaring shenanigans await our cardboard hero? Someone wants to crash the dollar, so Ryan needs to audit some account in Russia.

Wait, what? So this is like a thinking man's thriller? Only if the man is comatose, I'm afraid. So it's an action movie? I guess you could say that. The problem is that the film wants the be both. How can any kind of coherent plot develop, when these two extremes are always at odds with each other? Good question. Shadow Recruit's solution – dumb down the plot, reduce the action – doesn't seem to be the way to go.

It's worth noting that the primary focus for this film - building a foundation for the Jack Ryan character - fails completely at every level. An hour into this film we still don't know anything about our so-called hero, and since boyish good looks and a winning smile does not a character make, we never will. Chris Pine brings nothing to the part. Nothing. Less than nothing. Actually it's the kind of performance that makes me like him less in other films.

At some point during Shadow Recruit, we get to the big secret agent showdown scene, which coincidentally is also the funniest scene in the movie. Ryan needs to copy some files from Viktor Badguyovich's computer (yaaawn). To get him out of his super top secret secure office Ryan arranges a dinner with said baddie. Then he pretends to be drunk, he's told to leave, and while his civilian girlfriend keeps the most dangerous man in Russian talking, by flirting with him, Ryan sneaks away to infiltrate the man’s building, where he must hack a computer in the middle of a brightly lit office in full view of the adjacent building. And guess what?! It doesn’t work!!!

Seriously! Have these people never seen a spy movie before!? Did I forget to mention the part where the good guys get the bad guy's security ID by pretending to bump into him, and picking his pocket?! That TV show with the Olsen twins had more intelligent plans! Well, at least the sequence is a roller-coaster ride of excitement! Run Jack! Check those accounts!

I sometimes complain that the Pierce Brosnan Bond movies got too wild and crazy, but I'll take invisible cars and surfing on a wave of ice water, caused by a laser on a satellite, over this unimaginative drivel, any day. I mean, the final showdown is a fistfight and a countdown. Come on! What are you doing, guys?! And the worst part is, everyone involved seems as bored with this endeavor as I was.

Jack Ryan: Shadow Recruit will not be the start of a new franchise, but rather the reason for yet another reboot down the line. It’s worse than a TV-movie from the 90’s - so bland and vanilla that reading the phone book would be more intriguing. A laughable, lackluster bore, even by average movie-by-committee Hollywood standards. Frankly, if I had an international crisis to defuse and needed a secret agent, I’d call Johnny English before I’d call this version of Jack Ryan.
by David Bjerre