INT. WAREHOUSE - NIGHT
Following my recent rants about computer generated effects (here and here), I thought it would be fun to look into one of the old school visual effect techniques that computers have now rendered obsolete.

Today's subject is... The Cloud Tank.


CUT TO:
WHAT IS A CLOUD TANK?
A cloud tank is basically a big water tank.

It's primarily used to create a wide variety of atmospheric effects, mainly clouds, hence the name. Back in the old days this was a great way of creating organic shapes, which would otherwise have to be done with hand-drawn animation or perhaps smoke.

A cloud tank shot starts with a big glass tank. The tank used on Close Encounters of the Third Kind (1977) was 7 by 7 feet large, with a depth of 4 feet. First the tank is filled salt water. A thin layer of plastic is gently placed on top of this. Then the rest of the tank is filled with fresh water. Once the plastic is removed, and the water has been left to set for a while, you end up with something that looks like a single body of water, but because of the difference in density between salt water and fresh water there's actually two distinct layers in the tank now.

Next, paint would be gently injected into the tank, near the point where the two layers meet. Depending on the light conditions, camera speed, and a few other elements, it will look like billowing clouds when the paint disperses in the water

From what I gather, there are slight variations in the way the technique is used from project to project, but what I've described here is the basic starting point. These cloud elements would then be combined with live-action footage, or model photography, to produce a really cool, very organic looking shot.

The problem with using this technique, however, is that you're never really sure what you're going to get, and it's impossible to control precisely what happens. Basically you just have to keep shooting, and hope to catch something cool on film.

According to Douglas Trumbull on The Making of Close Encounters of the Third Kind Scott Squires was responsible for thinking up the specific setup used on that film. The same tank and a similar setup was also used on Raiders of the Lost Ark (1981), and other subsequent projects at ILM. However, Ken Ralston speculates in Cinefantastique that a similar technique was used all the way back in The Ten Commandments (1956).

Throughout the film the arrival of alien ships is often signified by the appearance of massive cloud formations. When the aliens kidnap young Barry from his mother it starts like this: 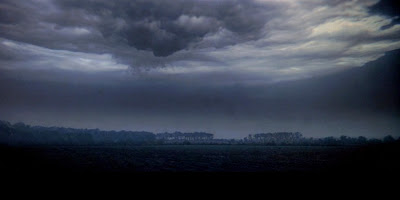 Later in the film, when the aliens arrive at Devil's Tower, a clear night sky is suddenly covered with clouds that seem to come from nowhere. Very spooky.

Additional animation and lighting effects could be added in post-production, or live during the production of the cloud elements.

The cloud tank was dusted off again for use on Raiders of the Lost Ark (1981), which also called for some angry cloud images. First there's the sequence, where Indy and his men dig through to the Well of Souls.

Hand-drawn lightning effects were added in post-production to enhance the dramatic shots.

Cloud tank elements also played a part during the last moments of the climactic sequence, where The Ark is opened and all hell breaks loose. In one shot the clouds part to make room for a giant pillar of fire.

The cloud element for this iconic image was actually created by Gary Platek, by jumping on the hose that was used to drain the water tank! This sent a burst of water back through the system, and up through the drain in the bottom of the tank, which in turn parted the "clouds" as the shock-wave moved up through the water layers.

A far less aggressive, but no less effective use of the cloud tank came with Poltergeist (1982). Here the technique is initially used simply to create the dark clouds forming on the horizon.

Later, though, when a tornado descends upon the quiet neighbourhood, the cloud tank was once again employed as an "angry weather"-tool.

A slightly more fantastic use for the tank came with the second Star Trek film. The climax of Star Trek: The Wrath of Khan (1982) called for a submarine-like showdown between two spaceships in something called a "nebula".

On this film a white latex rubber solution was injected into the tank. Lights with colored gels illuminated the tank, which produced the otherworldly results that ended up on the screen.

To give a different look to Flash Gordon (1980), and the many different worlds the film explores, a similar use of the cloud tank was employed to produce some very psychedelic images.

For most cloud tank shots the camera would be placed outside the tank, looking up at the bottom of the paint layer, but in Poltergeist II: The Other Side (1986) the camera shot from inside the tank, to create the titular dimension.

Several passes were combined, and heavily manipulated in post-production to create the complex shots.

A more recent film, Independence Day (1996), found use for the cloud tank again. This was during the dramatic arrival of the alien ships. Here the cloud elements were also heavily manipulated, this time with the help of computers, to achieve the final look.

The film was billed as a big budget tent pole film, but it actually used a fair amount of old school effects, such as in-camera shots, even though computers were an established tool.


FINAL THOUGHTS
The use of the cloud tank in visual effects seems to have ended somewhere in the late 90s, with the advances of computer generated effects, and due to the fact that it was such an unwieldy technique. In theory, you could basically set up a cloud tank shot in your own garage, but the reality is a bit different. For example, according to Gary Platek, they used 9 tons of salt during the 6 months it took to produce the cloud tank shots for Raiders!

At the end of the day it's what ends up on the screen that counts, and not how it was achieved, but I can't help but be impressed by some of these old techniques, such as the cloud tank. The amount of effort and ingenuity it took to produce these shots is mind-boggling.

So next time you see a movie from the 80s, with some cool, or strange clouds, spare a thought for the guys who spent months in a darkened room with a tank of water, a mountain of salt and some paint.

They made the heavens move, you know.


CUT TO BLACK.
ADDITIONAL LINKS AND RESOURCES
Articles used for reference include:

Special Features from the following DVDs were used for reference: