INTRODUCTION
Laputa: Castle in the Sky is the first feature from Japanese animation powerhouse Studio Ghibli, and the third feature from its master Hayao Miyazaki, and if you have no idea who or what I’m talking about, rest assured that this is a good place to start.

The story is set in a kind of alternate reality. Alternate, but not that farfetched. It’s a place where Jules Verne would feel at home. A place where man rules the sky, much more so than we do even today, but at the same time it’s a place where technology can co-exist with a magical sense of adventure. 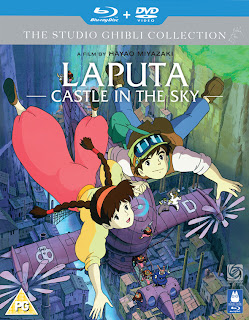 STORY
Young Pazu lives in a picturesque mountain town and works in the local coal mine. One day an unconscious girl floats down from the sky and lands, literally, in his arms. The girl, Sheeta, is being chased by a number of nefarious people. A group of pirates, the military, and some shady government suits. But why? It's all got something to do with the blue crystal she carries on a chain around her neck, the same crystal that appeared to make her almost weightless when she fell from the sky.

Pazu brings Sheeta to his shack and the two of them quickly connect. Alas, there’s no rest for the wicked, or the profoundly innocent for that matter, and soon bad guys show up at Pazu’s doorstep to get their hands on Sheeta, and more importantly, the crystal. And so our heroes run, and the adventure can begin.

What follows is a perilous chase at breakneck speed, which takes the young couple across the mountains, through the mines, and most importantly into the air. Meanwhile we learn about the legendary flying castle of Laputa, and we learn that Sheeta may know more than she’s letting on. 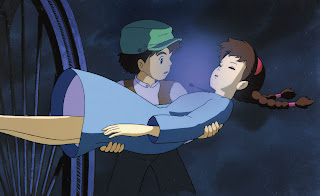 REVIEW
There’s something kind of comforting about this movie’s combination of wide-eyed innocence and a darker, deeper motif. It’s a juxtaposition mirrored in one of the memorable images from the film: As we watch a giant battle airship emerge from the clouds we’re filled with a sense of wonder and awe, but moments later the fascination gives way to a disturbing question: What could this deadly machine be used for?

The reason I find this comforting is that it reminds me that a film can be more than one note. These days, mostly for marketing purposes I guess, it seems like every film gets a simple label - but you can’t put a simple label on Laputa, because it’s more than just one thing.

There’s the magical adventure, the search for the titular castle, which takes us to the skies on a wild ride, but there’s also the dark mystery behind Laputa, the sinister government plot, and the questionable characters that take part in both. There’s the action aspect, full of elaborate chases and battle scenes. Next to that, though, there’s the subtle and tender relationship between our two young heroes - something we can almost call love. 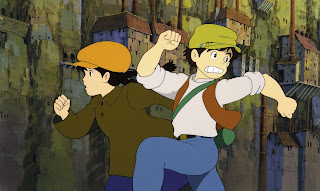 As the story progresses we continually switch between opposites, in a very satisfying way. One moment we get scenes like the one aboard the pirate ship, when Pazu and Sheeta find themselves the unlikely partners of that shady bunch, and Pazu is put on lookout duty in the crows nest. Of course Sheeta sneaks up and joins him, and as they cuddle up together under a warm jacket, they share their hopes and fears for the future, while all the stone cold pirates listen in on the intercom with misty eyes.

We also get truly chilling scenes, like the one where the shady government agents have captured Sheeta, and she’s shown the remains of a wrecked robot that fell from the sky, the clue that told the government Laputa might be real. The robot looks like the ones we know from the old Fleischer Superman cartoons (mirrored as well in Sky Captain and the World of Tomorrow (2004)), and we get the feeling that any moment the giant metal creature could wake up and tear everyone to pieces.

Slowly the mystery expands and the true scope of the story is revealed. When we finally arrive at Laputa - I'm sure that's not a spoiler - the place looks breathtakingly beautiful, and yet sad. The theme about the dangers of over-reliance on technology, or perhaps that technology will inevitably destroy us all, creeps into the story, and once again the Jules Verne inspiration becomes clear. Remember Captain Nemo’s musings on the maturity of Man and his inability to handle the sophisticated power-source that pushes Nautilus effortlessly through the water? 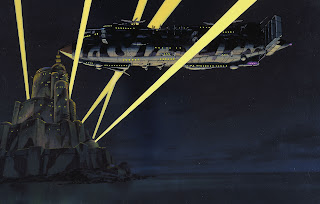 Despite several story lines and a sometimes complicated backstory, the film very rarely has to resort to cumbersome exposition, the images often speak for themselves, and despite the heavy themes, the film itself seems light on its feet.

Needless to say the animation is gorgeous. Every time I get my hands on one of these old school hand-animated films I'm amazed at the artistry on display. I watch with bated breath as a metal monster claws its way to freedom through a sea of hand drawn fire, or when a flying fortress is blown into a billion pieces, which falls to the ground, each meticulously guided by a true artist with nothing but pencil and patience. But the quiet moments deserve some recognition as well. Whenever we’re flying, across the vast beautiful sky or through billowing clouds, I’m in awe. THIS is what animation was created for - to make the mundane magical, to bring fantasy to life. I hope this type of old school animated movies never go the way of the cave paintings. Computer animation can be a wonderful thing, poetic and beautiful even, but hand drawn animation can do something truly unique. 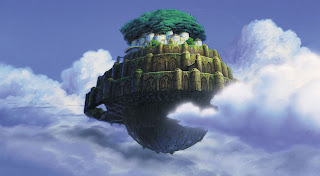 BLURAY
Laputa: Castle in the Sky is released in a Blu-ray/DVD combo by Optimum Releasing in England.

The disc features both the original Japanese audio, with English subtitles, and an English dubbed track. Of course you should always go with the original track, but sometimes the dubbed track can be useful when you watch a film the first time. Yes, I know, purists will probably consider it blasphemy, but I’ve had experience with this. I couldn’t get through more than 20 minutes of Satoshi Kon’s Paprika (2006), the first time I saw it. The story was too complicated and the visuals too dense. When I gave it another shot, I chose the English track, and suddenly it was much easier for me to take it all in. When I go back to the film, I’ll definitely use the Japanese track, but I needed the English dub to get all the way through the first the time. 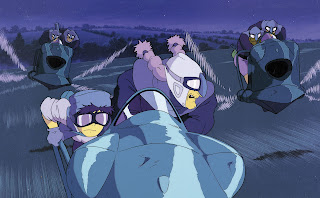 The disc also features some storyboards, promotions videos and some interviews. It’s quite brief, but I found the 3-4 minute clips of Miyazaki explaining his inspirations for the story to be just what I needed.

As for the image... Well, I have to say, this Blu-ray looks absolutely stunning! The images are clean, with great colors, but they didn’t seem to be digitally manipulated to obscure all the organic flaws of classic animation, they were all right there, in crystal clear high-def. Admittedly animation is a very forgiving genre, when it comes to Blu-ray or DVD, but for a hand drawn film from 1986 this seems perfect to me.

I do hope Optimum gets around to releasing Spirited Away (2001) and Princess Mononoke (1997) on Blu-ray soon. I'd sure love to revisit them. 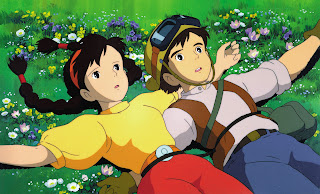 FINAL THOUGHTS
Laputa: Castle in the Sky is a lot more accessible than other Ghibli films I’ve seen, like Spirited Away or Howl’s Moving Castle (2004). It feels more classic in nature, and less weird. I'm not sure today's overstimulated kids can sit still long enough to make it through this film, but they should.

Laputa: Castle in the Sky is a beautiful film, both in terms of its images and its spirit. You can’t say that about many films these days.


Acknowledgements
Thanks to Optimum Releasing and Edith Chappey for making this review possible.
by David Bjerre