The Gate is one of those 80's movies that have gone a bit under the radar. In a decade packed with so many awesome films, it didn't stand a chance. However, it does feature an awesome goodie bag of great visual effect shots. The forced perspective shots in the film are particularly good. They were used whenever the small "minions" appeared. Full-sized actors played the tiny demons, but they were placed further away from the camera than everything else, so they appeared to be very small. 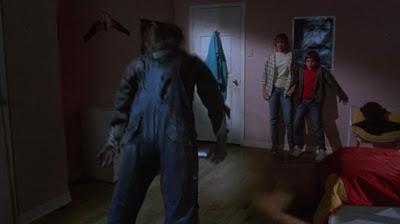 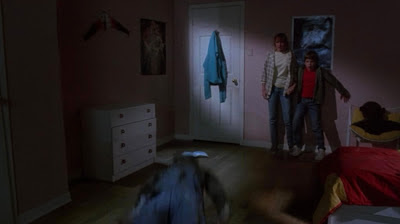 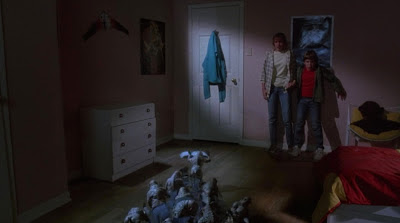 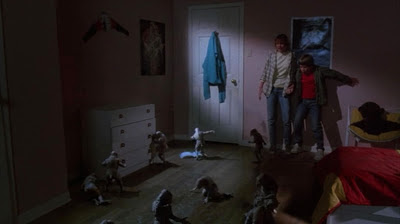 In this specific shot the minions attack a boy and his sister in a bedroom. A zombie-like workman stumbles into the room, he drops to the floor and is instantly transformed into a dozen minions.

The two kids who appear to be full-sized were shot on an elevated bedroom set, where most of the floor had been removed. Several feet below, on the studio floor, an over-sized replica of the bedroom floor was constructed, filling up most of the 60 feet long studio. 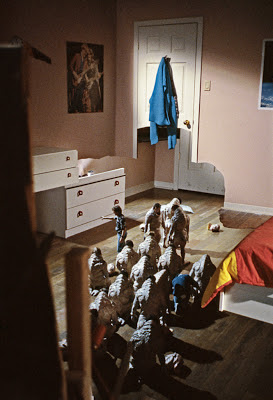 The full-sized and the over-sized sets had to line up precisely, from the camera view, or the illusion breaks down. They were tied together by having objects cross the split line - like the shirt hanging on the door - and by using shadows, which had to be carefully matched on both sets to blend together.

The final touch was the falling workman. This was a normal-sized puppet dropped over the  edge of the elevated set. Hand-drawn mattes took care of the transformation from puppet to minions. Randall William Cook was the mastermind behind this illusion, using good old-fashioned camera tricks - a.k.a. movie magic. 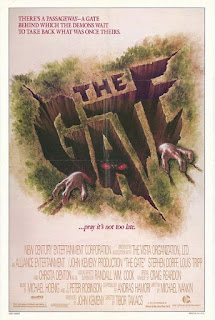