It's the end of a decade (sort of, not really, let's not get into that), but before we can look back at the past 10 years we have to complete the top and bottom lists for the past year. So without further ado, here are the worst movie experiences I had last year.

What if Superman turned evil when he was a kid? That's the premise of the film. And also the entire plot. Nothing happens here that you can't predict based on that one-line description. And it's just as excruciatingly dull as it seems.

Michael Bay went from solid action director to "for the love of all things good and true please make it stop!" in the span of two decades. He’s the only filmmaker of that magnitude who seems to have devolved rather than evolved as he grew older and gained experience. 6 Underground proved beyond any doubt that his time has come and gone. Just watch the first 20 minutes of this film! Your brain will start to melt and leak out of your ears. It's loud, incoherent, and brash. The definition of everything that's wrong with modern action movies. Also, we've seen it all before. Plus that "30-years-too-old-to-hang-out-with-a-bunch-of-models" playlist Bay's got going on the soundtrack doesn't help him either. Can I tell you what I want, what I really really want? I want Bay to go back to basics, stop trying make his movies louder, faster and bigger. Make them stronger, more focused, more elegant. I don't say this often, but act your damn age, Mikey.

Why in poo-perfect hell would you make this movie? The story is utterly stupid, even Steven Seagal would have rejected this plot for one of his 11 direct-to-video films this year. Why on earth would a younger clone of a trained assassin be the perfect person to take down his older counterpart? Wouldn't the exact opposite be true, when you think about it?

Director Ang Lee thought this was a great story apparently, and the perfect opportunity to play with high frame rates (which no one likes) and digital characters (which no one buys), and have two Will Smiths running around (which no one asked for). The film is going to lose its backers $100 million. I hope that's high enough for Hollywood to learn something. But I doubt it. 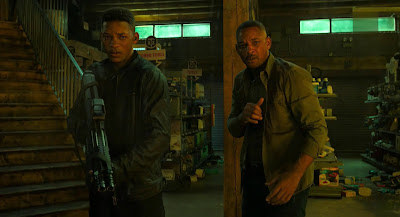 There's a space station. Something goes wrong. The people on the station have to fix it or die. How hard can it be to make at least a passable film based on this setup? I’m usually somewhat forgiving when it comes to low-budget science fiction movies with an interesting idea, but this one failed miserably on so many levels. The first line of the first opening text, before the film has even begun, raises multiple questions about the story, the setup and the mental capacity of the writers. The. First. Line. And then it just gets worse from there. A confusing setup, fumbling scenes, a complete lack of the most basic scientific knowledge are just some of the problems that drive this clunker into the ground. There's a tiny bit of redemption in the finale, but most people will have wandered into the airlock by then.

Jordan Peele’s follow-up to Get Out was doomed to fail from the word go. No way he could hit even close to that same mark again, so what did he do instead? He doubled down. He made an even weirder film, with an even more Twilight Zone-ish plot than Get Out, but it just doesn't work this time around. The twists are deeply unsatisfying, and the film isn't even all that scary, because it takes so much effort trying to figure out how this all fits together (and you can't) that you don't have time to enjoy the story. Add to that a clumsy and inelegant political agenda and you've got a deeply disappointing film on your hands.

10) The Haunting of Sharon Tate

That other 2019 movie that uses the Tate murders for its own distasteful amusement. This movie is extremely bad, but it's a direct-to-video-ish film with Hilary Duff as Sharon Tate, so I don't expect much from it. The Haunting of Sharon Tate milks that one horrible night for everything it's got by attempting to turn the event into a supernatural thriller, where Tate sort of had predictions about her upcoming fate, while it indulges in the same perverted alternate history wish-fulfilment as Once Upon... It doesn't work for either film, but it least no one saw this one.

I've seen plenty of dull movies with unambitious stories, but for some reason this one bothered me the most. It was the second episode of the first season of Hulu's Into the Dark series. The first movie was fantastic, setting this one up for an even bigger fail. The first movie showed how the format could be used to delightful perfection. This one showed the exact opposite. A dull, one-note story, with one blatantly obvious trick up its sleeves which it milks to no effect for 85-ish minutes. Most movies accomplish more in a single scene than this one did during its entire running time.

This sloppy, inaccurate biopic is the most baffling runaway hit in recent memory. It made almost A BILLION DOLLARS at the box office. Rami Malek won the Oscar for a truly unimpressive performance, where it's hard to focus on anything other than his false teeth and attention-seeking mustache! It even won the single most undeserved Oscar the Academy has ever given out in the Best Editing category (yes, I checked the archives).

The film's sordid production history is legendary, and Bohemian Rhapsody looks and feels like it was slapped together with whatever material was caught on film when they gave up trying to shoot it. It's an extremely frustrating watch, and worst of all, the film plays fast and loose with historical facts, so much so that it's completely useless at telling the story of Queen, and completely misleading when it comes to their legendary lead-singer. It can't even get Queen's undeniably catchy music to work. In fact, it kinda makes you hate their songs little bit. Now that took some skills!

On paper I get how this could have looked like a good idea, but within the first few seconds of the trailer you could tell how this monstrosity would turn out. The almost childishly simple script from James Cameron is where the trouble starts, but every step after that makes it worse until we end up at the lead character - uncanny valley personified. This is not a movie. It's a dull, predictable, ugly, soulless, heartless, empty product. But we ain't buying. I want a sequel to this less than I want a sequel to Avatar. That says it all.

This film could just almost have been number 1 on this list. The technical expertise on display and the charisma of the actors involved prevented this, but make no mistake about it, I loathed everything else about Once Upon a Time... This is peak Tarantino obnoxiousness. Overlong, dull, simple-minded and self-indulgent. If you made it through Django Unchained and The Hateful Eight, you may very well have thought "Well, it can’t get any worse!" Tarantino is here to prove you wrong.

This isn’t a story about Hollywood, it’s not a movie about the 60s turning into the 70s, it’s not a story about the Manson murders. Hell, it’s barely a story at all. This is about a TV actor who once had a show and kinda wishes he had another. And then he has a friend. The End. That’s it. That is literally it. It looks deceptively cool, but beneath the shiny veneer, there's a gaping hole of nothingness, solidifying Tarantino’s pole position in the "wow, someone should say 'no' to him" category. And don’t get me started on the bafflingly and miscalculated, deeply offensive finale, where Tarantino bastardizes history for his own shallow amusement. Sharon Tate has already been butchered once. There's no reason to put her through that again.

Remember that adventure story they already turned into a fun romp with Errol Flynn, a classic animated Disney film and an irresistible 90's Kevin Costner vehicle? Yeah? Why don't we make that dark and broody? That's a great idea! Then we could hire that obnoxious Taron Egerton guy! Only if that less talented Ansel Elgort isn't available! Deal! Can we make it anachronistic too and pretend it’s a style? Sure we can! Let's go, everybody! Dumb is the new black! Sorry Jamie.

What is the world coming to when you can't even trust a Nicolas Cage B-movie to be entertaining and silly in the right way? There’s a trained assassin and a dangerous animal on a container ship, and Cage has to chase them both. How can you not make that work?! Nic, call me next time. I’ll have a script ready for you in a week. And then I’ll have spent 7 times longer writing it than the folks behind Primal spent on their script.

Laughably inept low-budget action flick that somehow managed to con both Gary Oldman and Olga Kurylenko into signing on. Olga plays a courier who has to protect a witness set to testify again bad guy Oldman. Oldman was on the set for a day or two I suspect. Almost the entire plot takes place in an underground parking garage. It does nothing. It’s about nothing. The scenes are full of nothing. The dialogue is pure nothing. It's almost fascinating to watch this train-wreck unfold. I had a great time turning it into a fun review for my podcast, so that’s my excuse for finishing it. Most people will not have a similar excuse and should avoid it at all cost.

The hopefully last Rambo movie managed to be both spectacularly unambitious AND fail miserably. Not only is there no reason for a Rambo 5 to exist, in light of the pitch perfect end to the fourth film, the story it chooses to tell is so lackluster and banal that it’s hard to fathom why anybody even bothered. Plus, it's already been done 10.000 times better in Taken. On top of that Rambo: Last Blood is so fucking stupid. Even in the context of a Sylvester Stallone Rambo movie it’s dumb. Rambo was never the sharpest tool in the box, but here, he seems almost mentally impaired in some way.

I like dumb, loud action movies, but even the most clueless action movie fan will be hard pressed to find more than a minute or two worth their time in this utter bore. This is weaker than most of the Steven Seagal or JCVD direct-to-video movies I’ve seen. To paraphrase The Bard. This is a tale told by an idiot, for idiots, full of emptiness, signifying nothing.

I decided not to make a Bottom 20 or 25 this year, though I could have. There are some truly bad movies hiding just outside this list, but we mustn't dwell, let's look forward to the best of 2019!
by David Bjerre